THE Great Western Railway’s ‘County’ 4-4-0s were conceived as part of George Jackson Churchward’s grand plan to construct a whole range of standardised locomotive classes that would equip the GWR for many years to come.

The first of these standard locomotives, the ‘Saints’, ‘28XX’ 2-8-0s and the ‘31XX’ 2-6-2 tanks were all preceded by prototypes, but the ‘County’ 4-4-0s (or ‘38XXs’) went into volume production straight away with no prototype deemed necessary. The first, No. 3473 County of Middlesex, emerged in May 1904 with the remaining nine (Lot 149) – all named after English and Welsh counties – following over the next five months.

The locos were equipped with lever reverse and steam brakes; the brake levers being carried ahead of the driving wheels with the pull rods suspended outside the wheels. Bogie brakes were fitted as standard (later removed). All carried small Dean-type copper-capped chimneys, were paired with Dean 3,000gallon tenders, and were turned out in the pre-1906 livery with Indian Red frames.Unfortunately the short 8ft 6in coupled wheelbase and long 30in piston stroke resulted in a lively ride at high speeds, but the class must have proved their worth as in 1906 a further 20 (Nos. 3801-3820) entered traffic between October and December. The first 10 of this new batch were named after Irish counties in acknowledgement of the GWR’s growing links in the country, with the remaining 10 reverting to the English/Welsh counties. These differed from their predecessors in having vacuum brakes, with the brake gear working behind and inside the driving wheels. Superheating of all locos began in 1909.

In 1911/12 the final 10 (Nos. 3821-3830) were constructed, incorporating a number of design changes such as screw reverse, the Holcroft curved framing, top feed and superheating. The centre line of the cylinders was also dropped by 2½in to bring them in line with the driving wheel centres.

Totalling 40 in number, the Churchward ‘38XXs’ were a very successful class doing all (and more) that was required of them. In their short lives they notched up high mileages, with No. 3836 County of Warwick clocking up no fewer than 1,044,235 miles by withdrawal. Three other members of the class topped the one million miles mark, with a further 18 running more than 900,000 miles. 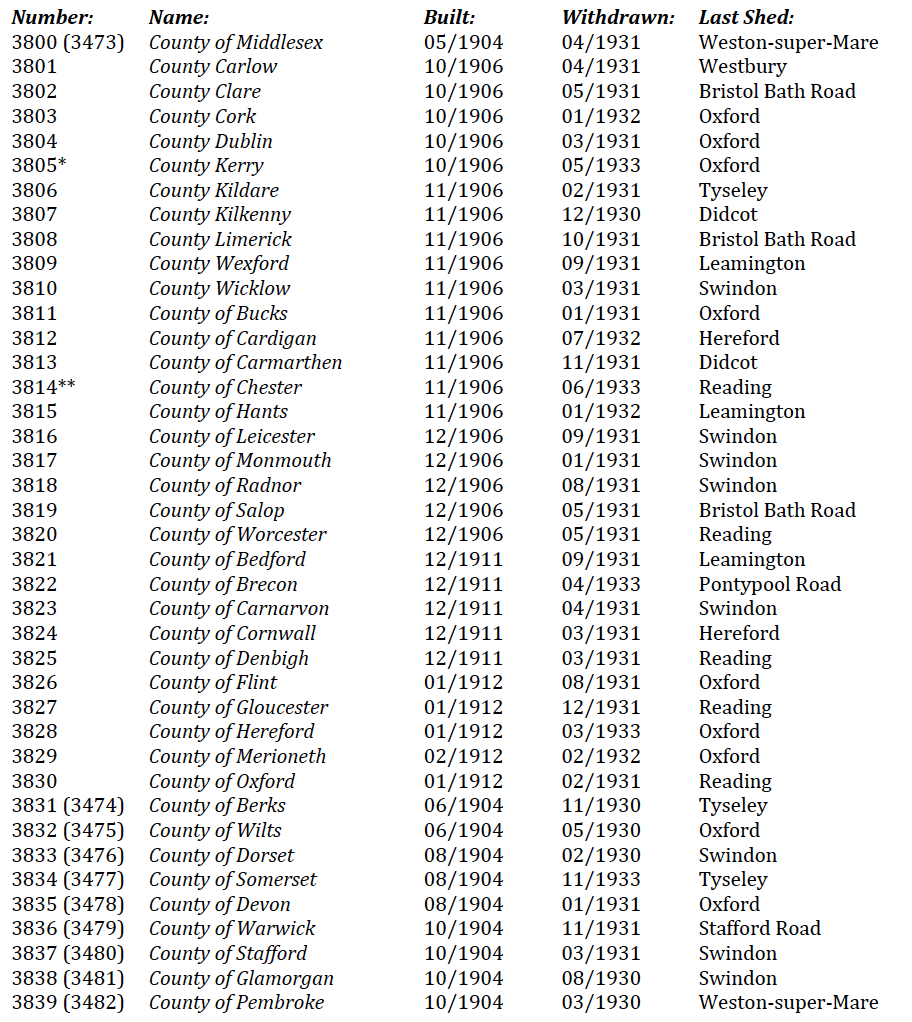